ISEA Foundation announced the appointment of the High Level Financial Technology Committee to oversee implementation and adoption of Mobidollar throughout Africa and globally. Her Imperial Highness Princess Shavonne V, shared her mother’s the High-Level committee Chairman's decade long vision of development for Africa and the global South. She noted that the Mobidollar adoption is an affirmative strategy within PVIIP planning and framework. The event paralleled the United Nations Commission on Social Development's 56 session at its headquarters in New York City.

The event was attended by several Royals, distinguished guest and representatives of Non-Governmental Organizations (NGO) working within Africa. ISEA Foundation a NGO with special consultative status to United Nation Economic and Social Council and developers of MobiDollar and Mobicoin delegated the appointees and the matter was affirmed by quorum of 11 members. All members of the High Level Financial Technology Committee were awarded by Letters of Appointment and Medals signifying their acceptance of the responsibility and function of the post.

The other attending guest were enthusiastic about the solution as it was presented by His Royal Highness KeonHo Kim, Founder of ISEA and developer of the MobiDollar. They expressed their acceptance of the appointees and principles of Servant Leadership and the focus of multinational Mobidollar.

Questions were taken by the speakers Thefor, Inc CEO Taft T. Pettiford and ISEA advisor Jae Sol Lee. It was pointed out that a main distinguishing feature of this development funding solution is that it is not a loan. Nor will it cause further marginalization of already marginalized groups. When asked how it will address poverty for poor people Mr Pettiford responded that "decrease in debt flows will free revenues up for governments which can be used to pay for social floors."

Mobi is a cooperative currency which is distinct from other commercial coins, now making rounds in the speculative Initial Coin Offering (IC0) space. The MobiDollar is Survival money addressing the needs of the poor around the globe.

The African Kingdoms Federations head Her Imperial Majesty Queen Shebah III the Queen of Sheba, entered upon the blockchain a common asset of surface land for MobiDollar, benchmarking the successful results of the Mobi. We have a niche offering poised to bring Africa in lock step with the 4th Industrial Revolution.

To be clear neither African Kingdoms Federation-AKF nor ISEA Foundation is seeking investors, rather they seek people of goodwill to work for improving the plight of those marginalized.

Someone once said: "The only thing necessary for the triumph of evil is for good people to do nothing"

In keeping with the momentum of the Fourth Industrial Revolution the following ISEA Foundation High Level Financial Technology Committee (HLFTC) members were selected by the Queen Of Sheba. The committee is the global governance body to MobiDollar for Survival Money. It is not currently for sale in the open market but controlled to fund Social Protection Floors and provide necessary essentials for human survival and well-being. The Queen of Sheba selection for the High Level Financial Technology Committee (HLFTC) Currency Issuance Group has 20 Members, of which 11 were appointed at ISEA, including two Imperial lines family members’ high representatives:

And others appointed Her Majesty's Commissioners to the High-Level Financial Technical Committee - Emission Committee:

The High Level Financial Technology Committee (HLFTC) MSGnet Committee first few were named, and on Feb.5 was expanded to 29 of 50 ROYALS to be appointed, including 1 Imperial Royal high representative all selected by the HLFTC Chairman the Queen of Sheba for 510 MSGnet CPM leadership functions:

Another 19 were selected for possible nomination after review at the upcoming ISEA Foundation - AKF international Events which includes in Nigeria/Africa/Afrasian Lines, Egypt/Arab-African Lines, Tunisia/North-African Lines and UAE/Middle-East/Asia lines, for potential appointment to the MSGnet Leadership roles that is specifically for Royals.

Ongoing will be further ISEA - AKF review of Royals from throughout the Global Nations of the South World Nubia and Sheba ETAMENAA Africa-Eurasia lines. Those that remain after reviewed, and those confirmed from the above 9 will be appointed by the The Sheba Throne, to the Council UN 510 MSGnet 50 Civic Prime Ministers..

All appointees and all nominated for present review must maintain an active status within ARC CONGRESS COMMUNITY of AKF.

All appointees must maintain an active status within ARC CONGRESS COMMUNITY

ETAMENAA lines.Officials of The Throne and Court Of The Royal House of Sheba 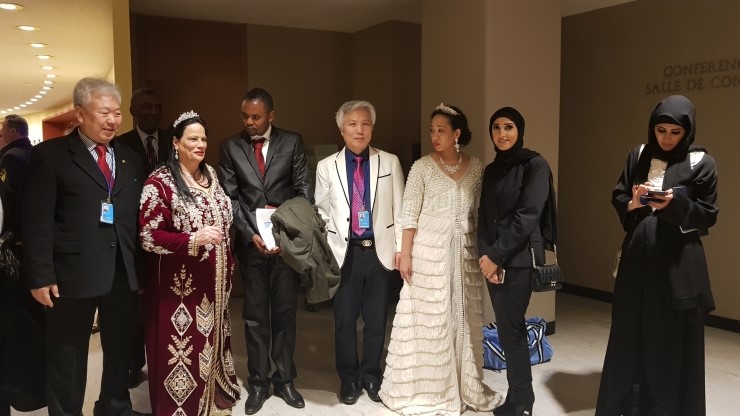 The day’s events were concluded with a sumptuous VIP Dinner at the Millenium Hilton New York One UN One Plaza. The already perfect evening was accentuated by exquisite Traditional Korean Music “Arirang”, performed by musical genius Jihyang Seo, Violinist and PhD candidate at Rutgers University.

At that time, official recognition as Committee members was instituted and other business conducted.

Her Imperial Highness Crown Princess Shavonne V. shared congratulatory remarks with the guests and enjoined people of goodwill to effect the changes the combined work of her mother, Her Imperial Majesty Queen Shebah III, and His Royal Highness Henry KeonHo Kim are implementing in this lifetime.

Her Excellency Noora Jamal Ali Sanad Alsuwaida of the United Arab Emirates shared the milestones of her organization Association of Cancer Patient within Syrian Refugee Camp and expressed her support of Her Imperial Majesties PVIIP and Mobidollar. She extended the opportunity to host the next conference within Abu Dhabi as her guest, which the hosts accepted and begin to plan for.

Her Excellency was accompanied by the first United Arab Emirates woman mountain climber Hon.Dana Alali who expressed interest to plant a flag of the AKF/ISEA Union on Mobidollar atop of Mount Everest next April, God willing.

HRH Princess Mohiba Khalil of the House of Sheba Royal family the Throne Ambassadress of Her Imperial Majesty Queen Shebah III remarked on the Humanity of these efforts and tragedy of the suffering on Earth. She urged healing and support for the suffering people the world over including through emotional intelligence.

She was accompanied by Netherlands national Nana bowers who shared her organizations work at compassionate healing. She gave all attendees a Silver-tear to remind them of the pain of others and hope for a better future. The presentation moved everyone and the guest gladly wore there pin.

We welcomed the learned comments of Mr. Richard Jordan of RASIT on the implementation of Blockchain Technology. He noted that blockchain is not new to Africa and that for years it has been used in agribusiness for supply chain efficiency.

The benefit of adopting MobiDollar as a sustainable development funding solution are:

If you were unable to attend, you missed a wonderful and successful event, dedicated to service of humankind. We shall be hosting many more such events, so, please consult the website. All selected that were not present, and further remaining selections, will be conducted at the coming events in planning in partnering host countries.

We would like to thank all the participants to the event, including Mr. Richard Jordan of RASIT, Mr. Al Hope of Hope for Africa of, Mr. Christopher Hope, Mr. Moise Michel and Mr. Alan Kadish, Esq., Amb.Aurora Aquino and Mr. Ban Tran, Mr. Lev Kremer of Belgium, Mr. Michael Mambote of the Netherlands for the tremendous support.

We thank Korean delegation for both English language production in honor of the event!

Notification: Office Of The Queen Of Sheba. Ceremonial Functions on Hold until Post-Pandemic!

7/27/2020 The CIO-Crown Imperial Office of the Queen Of Sheba, the Empress of the African Continent Nubia-Sheba Kingdoms, hereby inform that all Crown Appointments of non-royals elevation function: C

Her Majesty is now Doctor of Philosophy (PhD) and a newly Inaugurated Professor!